The manual lifting of pallets has been eliminated at the Shipping Department in one of the Tulip retail packing centres in Denmark. Pallet handling is now automated with a PALOMAT® Greenline. This has created better workflow, which has also ended related work injuries.

The employees at Tulip’s Shipping Department were sceptical at first when Factory Manager Dennis Harder Sørensen introduced a new Greenline pallet magazine from PALOMAT®. However, after a short period of time, the employees were very happy with the automated palletising system.

The department handles up to six tonnes of pallets a day, which previously had to be lifted manually – and according to Dennis Harder Sørensen, it was taking a physical toll on employees.

Previously the pallets had to be tipped manually from a stack of 12–13 pallets, which was physically strenuous for our employees. Fortunately, that’s now a thing of the past, because now have a fully automated palletising system that has removed the heavy lifting."

The new palletising system has of course changed the employees’ workflow but we have retained the same volume as before. The Greenline pallet magazine is actually a cheap solution, and it is a valuable investment for our employees, who now have a better working environment, where they are exposed to fewer work injuries",

Greenline is a fully automated pallet magazine that handles all pallets at floor level. All employees need to do is insert or remove the empty pallets using a forklift truck or hand pallet truck, and the palletising system does the stacking and destacking.

The employees in Tulip’s Shipping Department had previously experienced back injuries. This included production employee Jonas Christensen, who was forced to stay at home at the beginning of 2018 because of an injured back. He is already back working in the department, where he is benefiting from the new pallet magazine:

Before I would get tired after a long working day but this here – it just works. I don’t have a sore back anymore and I don’t even feel any discomfort after my accident. I’m really satisfied with the new pallet magazine here on the site. It ‘s not very often you see a new machine being well received, but this one was",

According to Dennis Harder Sørensen, the automated palletising system from PALOMAT® has eliminated the risk of back injuries at Tulip’s Shipping Department and has resulted in employees who are more satisfied.

The pallet magazine minimises inconvenience and prevents potential injuries among our employees, who also tell us that they are less tired when they return home from work. So overall, the automation of pallet handling has created a better work environment at our factory and given us happier employees",

According to Dennis Harder Sørensen, him and his colleagues had discussed several times about the possibility of acquiring a palletising system, but they could not find the right solution.

When I saw the PALOMAT® competition on Facebook, I quickly called them to learn more about the pallet magazine that was on the image. We didn’t know of PALOMAT® or their products, so we obtained a Greenline pallet magazine for a trial run, and it proved to be the perfect solution",

In fact our employees were so satisfied with the new system that after only a month, they asked for another pallet magazine. They had personally found a space in the department where the palletising system could stand",

says Dennis Harder Sørensen and adds that the management are now considering whether other departments at the factory need an automated palletising system. 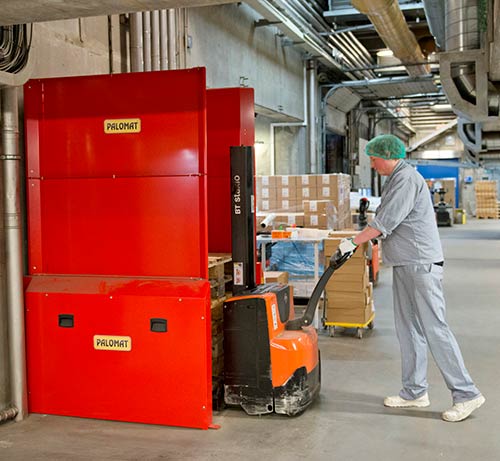