The work environment has seen marked improvement at ABB

In ABB's cable box production line there is no longer any manual pallet handling, as the department automated the pallet handling with a PALOMAT® Greenline. This has resulted in both an improved work environment and a streamlined work flow.

The main aim, when production manager Ole T. Jensen introduced the idea of a palletisation solution from PALOMAT®, was to improve the work environment. He had good experience of the palletisation systems from his previous workplace, and had been used to them being included as a natural part of the pallet flow.

Ole T. Jensen is the Production Manager in the department of ABB that produces exterior claddings and the internals for cable boxes. A certain amount of pallet handling is involved in the production, anything from 30 to 100 pallets per week – and that handling was carried out manually and with forklift trucks.

I eventually grew tired of watching employees pulling down pallets manually. Furthermore, not everyone in the department has a forklift truck licence, so employees often had to disturb the forklift truck drivers in order to get some help stacking or destacking",

explains Ole T. Jensen, who thought that an automated palletisation solution from PALOMAT® was an obvious way to improve both the working environment and the workflow.

The six employees in the cable box production line are now assisted by a PALOMAT® Greenline – a fully automatic palletisation solution for 15 EUR-pallets, which stacks and destacks empty pallets. And the solution has been very well received:

"People at ABB previously didn't know about the PALOMAT® solution, and our Greenline is actually the only one in the entire factory so far. A few people have stopped by from the other end of the factory, just to see what it can do," the production manager says.

The Greenline is one of PALOMAT's standard products, which can be placed anywhere, provided it is connected to a 230V power supply. With the Greenline, all pallet handling is carried out automatically and at floor height – the user just has to insert or remove the empty pallets by using a forklift truck or a hand pallet truck and the Greenline will handle the rest and will respectively stack or destack the pallets. The magazine only requires manual operation via a touch panel when there is a need to switch between stacking and destacking.

According to Ole T. Jensen there is no doubt that the PALOMAT® has lived up to the expectations of unburdening the employees and improving the physical working environment in the production line.

"Previously the stacking was carried out manually, and the pallets were not stacked as high as the PALOMAT® can manage, maybe up to shoulder height at most. And even though no work related or wear-induced injuries were recorded as a result of the manual handling, it is entirely possible, now and then, that an employee might have gone home from work with aching shoulders",

"That is certainly no longer the case, and additionally the risk of dropping a pallet on one's foot has been eliminated too".

Not only has there been an improvement in the physical work environment of the employees, but the work flow in the department has improved.

A second thing the production manager highlights about the PALOMAT® is that it has created greater order in the department:

"The production floor has simply become tidier than it was before. Before we got the PALOMAT®, you might see ten pallet stacks about the place, but now they are fed directly into the pallet magazine".

With PALOMAT® Greenline, ABB in Denmark
has achieved: 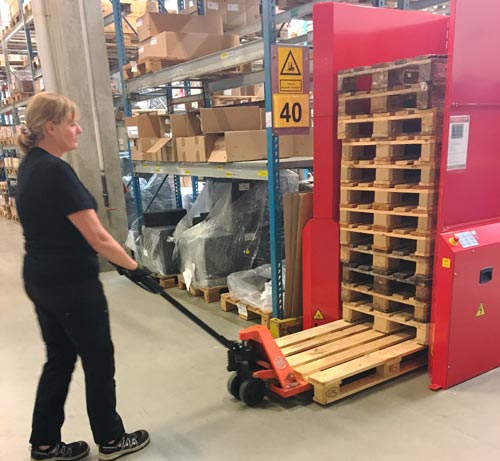