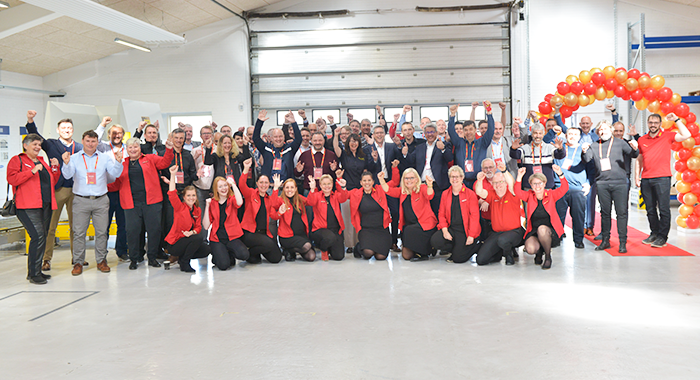 The atmosphere was almost electric when PALOMAT® held their largest and most successful Dealer Meeting for 43 of their dealers from across Europe.

Now we are finally back to an everyday life where we can meet for larger events, and across national borders, which is spreading joy among many, not least the business community. This was clearly felt when PALOMAT® invited their dealer network to a meeting in their head office in Nykøbing Mors in the north of Denmark. It was a day that offered great enthusiasm, high spirits, and joy of seeing each other again. This was also reflected in the well-planned programme of workshops, networking, industry-relevant presentations by, among others, Enrico Iversen, the founder of Universal Robots, together with group activities such as go-karting, followed by a 30th anniversary dinner, socialising and finale fireworks, where old relationships were strengthened and new ones were built. It is also of great significance to PALOMAT® that a company on Mors is able to attract so many companies from across Europe, says PALOMAT® Area Manager, Majbritt Svane.

“It was the biggest Dealer Meeting ever, and we were absolutely honoured by that. We feel that we live “in the middle of nowhere,” but that was no obstacle for those coming from all over Europe. I also think that people just really needed to meet up and see each other. There is simply no doubt about that.”

The fact that most of us have the need to meet up again is also backed up by the long-standing PALOMAT® dealer in Finland,

“It’s also nice to meet a lot of the other dealers. Many of us know each other from previous years and other events, so it’s good to see people again,” says Niklas Ahlblad, CEO of Ergolift Oy AB.

As well as people needing to see each other after a time where large gatherings haven’t been possible, Tine Clausen, Sales Coordinator at PALOMAT®, has an idea why PALOMAT® is able to gather so many of their dealers together. She believes that the relationships and trust with the dealers is something very special.

“The relationship and trust that we build with our dealers across the board is truly unique.”

PALOMAT® creates great value for their dealers
At PALOMAT®, sales over the past several years have gone in one direction: up. The reason for this must be largely attributed to the dealers, and in order for it to continue, we need to keep the pot boiling. It’s probably not entirely wrong to say that PALOMAT® is nothing without their dealers, which Majbritt Svane also expressed during the day. Therefore, it’s not solely for the sake of socialising that PALOMAT® invites all of their dealers to visit. It creates value for their dealer to take the long trip to Mors in the north of Denmark. They are also asking themselves why the dealers have to spend two working days to travel up here.

Fortunately, they have a good answer for that. Because at PALOMAT®, great emphasis is placed on building good relationships, and that dealers get PALOMAT® DNA under their skin, which gives them inspiration to sell the product.

“It means a lot because we pour a little PALOMAT® fuel into their blood, set a mindset that they should sell PALOMAT®s. If it can be both fun and educational, then they can also take that home with them,” explains Majbritt.

It is also essential that PALOMAT® equips their dealers so that they are even better prepared to sell the products. This is done through workshops, where they provide tools for sales and marketing for just this.

This is something that Annette Andersen, Marketing Coordinator at PALOMAT®, agrees with. She argues that PALOMAT® expend a lot of effort to make this aspect both exciting and useful.

“It gives our dealers the opportunity to network with other dealers, to discuss issues, and to get ideas on how they can solve problems and simply get some red energy so they can get to work once they get home. We think we’re doing a pretty good job of it.”

Adbro Controls Ltd from England are the newest addition to the line-up of dealers, and for them, both meeting with other dealers and the workshops have been a positive experience.

“We didn’t quite know what to expect beforehand, but today has been a real eye-opener. It has been very interesting and really good. Throughout, there has been something new that you could pick out and learn from the other dealers,” says Paul Admans, owner and Director of Adbro Controls, elaborating,

“We don’t just benefit as for selling PALOMAT®s. This is an advantage for our company in general, as the same techniques we have been taught here can be used across all of our services. I also think that the enthusiasm we have seen here has given us energy, and this is something we will take back to our company.

It gives PALOMAT® a huge energy boost
PALOMAT® benefits from the meeting just as much as the dealers, as it provides time to receive precious feedback from the dealers.

“They give us so much. It gives us so much to think about afterwards. For example, input about improvements,” says Majbritt.

The Dealer Meeting also provides an opportunity for PALOMAT® to get closer to their dealers, while filling the PALOMAT® tank with new energy. That’s something that the whole PALOMAT® team can underscore.

“While they are here, we build up relationships and put the potential to good use. It gives positive energy that drives us further. And the more energy we have, the stronger we are, and the further our dealers can go. 9 times out of 10, it ends in a sale, which makes it a win-win,” says Majbritt.

“And we’re more than ready for next year’s dealer meeting where we hope to see even more dealers than before,” concludes Annette, who has handled planning for the event.