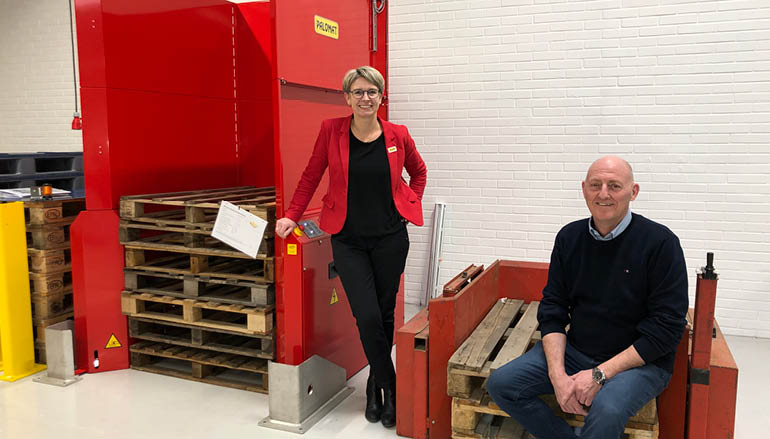 In 1992, two Danish smiths had the idea that stacking pallets from below would be both faster and safer. Thirty years later, 15,000 copies of this blacksmiths’ invention, the PALOMAT are in warehouses and production plants around the world, improving work environment, productivity and space optimisation. Many competitors have since tried in vain to copy the pallet magazine developed by Per Bisgaard Sørensen and Jørn Larsen – the competition has simply kept PALOMAT on their toes, to maintain their technological edge. This also applies to the quality. Some of the first PALOMATs, sold thirty years ago, are still operating.

“To toss a pallet into a stack is one of the worst things you can do to your body. It twists your body as you lift and turn. In fact, if you move a 25kg pallet without tools, it puts several hundred kilos of weight on your spine. Therefore, the working environment authorities generally do not recommend manual handling of pallets as it’s harmful to health.”

That’s how it sounds from a man, that with his own body can feel, what the price of wear and tear of heavy lifting is. He is called Per Bisgaard Sørensen, and he is one of the creators of the machine, that 30 years ago removed the need to manually lift heavy pallets. It was called PALOMAT – a contraction of pallet and automation.

In 1988, together with Jørn Larsen, Per Bisgaard Sørensen founded BILA A/S in Nykøbing Mors in Denmark, the automation company which today is Scandinavia’s largest plant of its kind. Here they built machines and equipment for dairies and mussel production. In his previous job, at the port of Hanstholm, Per Bisgaard Sørensen incurred a slipped disc in a workplace accident, meaning that he was more concerned with ergonomics and a healthy work environment than most others at the time.

“With PALOMAT, we developed a product that was ahead of its time. I got the idea when we built a special machine for a local cold store. The machine took pallets from the bottom of a stack, and it inspired us to build a pallet machine based on the same simple principle,” explains Per Bisgaard Sørensen, continuing,
“Back in the early nineties, there was a different culture on the job than today. When we demonstrated the PALOMAT, the men said ‘What do we need it for, then? It’s for sissies.’ But they learnt over time. In the meantime, we went to workplaces with a lot of women, who had no problems in spotting the benefits.”

Thirty years later and 15,000 PALOMATs have been produced and dispatched from Denmark to customers all over the world.
“However, many of the 400–500 million pallets that are used annually in Europe alone are still handled completely manually in many places. In other words, many workplaces in both industry and retail could still improve their pallet handling work environment. Over the years, I have experienced so many touching situations – for example, an elderly woman who suddenly could see herself staying in the workforce for five more years, as a PALOMAT meant that she no longer had to deal with pain and ask her colleagues for help in fetching pallets.”
This is what Majbritt Svane, who has been heading PALOMAT for the past 24 years says, elaborating:
“There is still plenty of potential for PALOMAT to realise in the world market. At a time when the price of pallets is rising sharply, it also means something that users of PALOMAT reduce the number of damaged pallets by 50%."

Fatal pallet accidents boosted exports
The first PALOMATs were sold on the domestic market, but soon after exports also got off to a quick start.
In 1997, an employee of a chewing gum factory in Belgium was so seriously injured by a toppling stack of pallets, that he lost his life. This tragic workplace accident affected one of the factory’s suppliers, ASP Handling, so deeply that they decided to find a solution that would prevent something similar from happening again in the future.
Ann Govaerts, director of ASP Handling in Belgium.
“My parents discovered PALOMAT at Hannover Messe in Germany, and after the trade fair they drove directly to Denmark to enter into a dealership agreement for PALOMAT sales in Belgium. Since then, more than 500 machines have been installed in everything from hospitals to the metal working industry and manufacturers of sporting equipment and medicine. It is a such an efficient machine that saves lives and limbs and solves a whole host of problems in a simple way.

“Unlike many of the other ergonomic products and tools, employees can use a PALOMAT without slowing down. On the contrary: it is three times faster to fetch a pallet from a stack. Nearly all workplaces use pallets, which is why PALOMAT is amongst the best-selling products of ASP,” explains Ann Govaerts.

ASP Handling and the 90 other PALOMAT dealers across 36 countries are supported with their sales by the manufacturer’s large sales and marketing operation – a team of 30 energetic employees of five different nationalities who work creatively. Every week, PALOMAT sets new activities in motion targeted at dealers so they constantly have PALOMAT in mind. It has also proven effective to send a PALOMAT to be tested by the dealer’s customer, who can try it out to see if they think it’s worth the investment before buying one.
“Nine out of ten PALOMATs stay in place, as the staff don’t want to get rid of it again. It quickly convinces people” in Majbritt’s experience.

The PALOMAT product itself is also being constantly updated by developers so that it keeps up with the latest demands in the world of logistics. For example, the pallet magazines from Denmark can work with both mobile robots and self-driving forklift trucks. There is also pride in knowing that the giants in the toy, cosmetic, food and beverage industries have established that PALOMAT is a standard solution in their warehouse logistics and productions around the world.